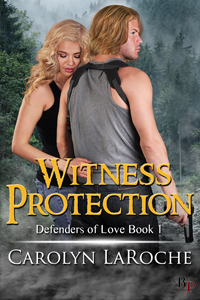 Ahhh, the fabled print release! A dream for every author, and once it comes to pass, can it scarcely be believed? For fellow Breathless Press author Carolyn LaRoche, this dream has become a reality. And I’m here to shout it from the rooftops for her! Well, the electronic rooftops at least. Which are a lot more sturdy and require far less maintenance. At any rate, here’s Ms. LaRoche with her latest PRINT release, Witness Protection!

Thank you for having me here today. I am excited to share the print release of Witness Protection, which came out on January 20th!

Someone wants NYPD detective Angelina Ferrara dead…again. Following her heart instead of her mind landed her in Witness Protection. Can she trust it and handsome detective Logan James to keep her alive this time?

As far as the world knows, NYPD detective Angelina Ferrara died in a violent firefight on Chelsea piers over a year ago. Living in the witness protection program as history teacher Lucy Taylor was supposed to save her life but being alive and living were two very different things. Until she meets detective Logan James when he goes undercover in the same private school where she works. Something about the handsome man with the gorgeous blue eyes piques her interest. There’s no doubt he has secrets… but then so does she.  When the Ricci crime family discovers she’s still alive, can she trust the same heart that landed her in the witness protection program in the first place to let Logan to help her survive it?

Her little car had an engine about as powerful as a hamster wheel. There was no way she was going to outrun the truck that was accelerating with lightning speed. On one side of her was a deep ravine, the other the steep slope of a mountain towered high and tree covered. The steering wheel shook violently as she pushed her little car to its limits, sheer adrenaline keeping her focused on the winding road. As she rounded a sharp curve, the back tires spun and fishtailed out from behind her. The tiny car shook violently as Lucy struggled to maintain control. The SUV caught up with her then, ramming into her rear bumper. The car groaned but held on. Lucy spun the wheel to make the next sharp curve, all the while her eyes searched for a way off the dangerous mountain highway. Another crash from behind jolted her car forward with such force Lucy lost her grip on the steering wheel. The car veered right but she managed to straighten it out before hitting the tree line.

“What the hell do you want with me?” she screamed at the truck in her rearview mirror.

The driver responded by slamming into the back of her car again. Metal ground against metal, gravel flew everywhere, and the car careened toward a thick bank of trees to her left. Straightening the car once more, Lucy crushed the gas pedal to the floor and watched as the speedometer climbed quickly. Lucy felt the little rush of excitement she always got in a good pursuit despite the fact that she was the one being pursued.

She whipped around yet another curve, and the SUV caught up with her. Just as she managed to get her little car under control again, the SUV crashed into her back end again with such force Lucy thought her car might shatter there in the middle of the road. The little car veered to the right, aiming straight for the side of the road and the ravine beyond. Lucy tried to regain control but the effort was in vain. She braced herself as the car plowed through thick vegetation, hit something, and started to slide down the steep embankment.

She heard the growl of the SUV’s engine roaring away over the revving of her own engine as the tiny car crashed through the underbrush. The car flew over a log and landed on the slick vegetation covering the incline. The car lost its hold on the ground and rolled its way down the slope, finally landing up against the trunk of a large pine tree where the engine died. Lucy’s head smacked against the steering wheel knocking her near to senseless. Everything fell deathly silent as she fought to remain conscious.

A loud crack broke the silence. As she watched through the broken windshield, the tree in front of her began to wobble. Blood trailed from her forehead into her left eye blurring her already shaky vision. Rubbing at it with the back of her arm, she used her other hand to desperately claw at the seat belt release.

If she didn’t get out of the car, the tree was going to fall right on top of her.

The giant pine swayed once and then began its descent toward Lucy and her crumpled car. Yanking hard at the jammed seat belt, her head swimming and her stomach churning, Lucy finally freed herself. Just as the tree crushed the roof of her car, like it were nothing more than a tin can, Lucy pulled her body through the opening that used to be the driver’s side window.

Carolyn LaRoche grew up in snow country but fled the cold and ice several years ago. She now lives near the beach with her husband, their two boys, two finicky cats and one old dog. When she is not at the baseball field cheering on big hits and home runs, she is busy teaching science to unwilling teenagers.  You can stop by and say hello at http://carolynlarocheauthor.blogspot.com/ or https://www.facebook.com/AuthorCarolynLaRoche?ref=hl.

To get your copy: