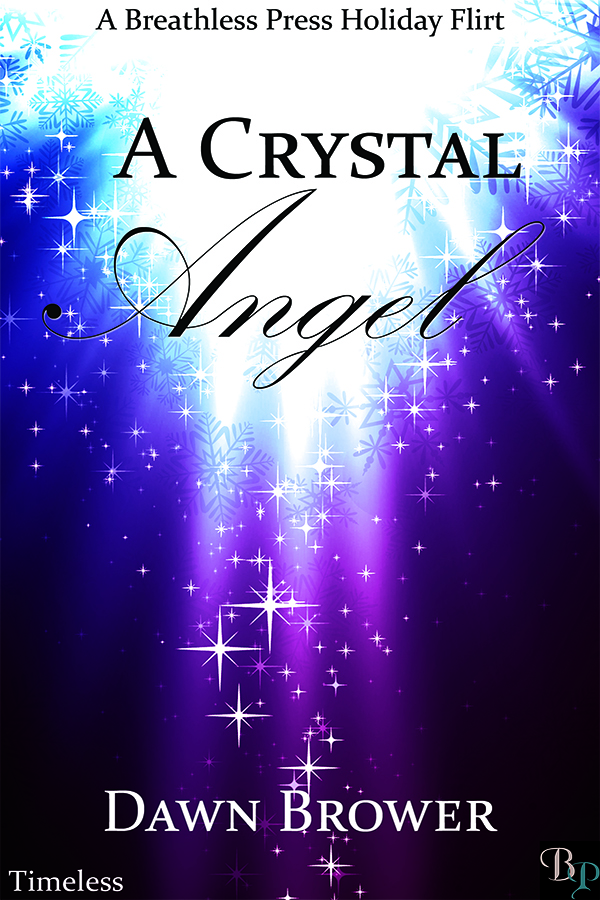 For this Saturday’s installment of Promotional Patty (my invented alter-ego dedicated to promoting all things wonderful for my delightful fellow authors), we have DAWN BROWER and her latest Flirt release, A Crystal Angel.

In case you’ve missed information about previous Flirts, a ‘Flirt’ is a Breathless Press-style short story. They’ve got a ton of excellent, quick reads, so once you read this one, be sure to check out the others!

A drunken promise of betrothal has turned Thor’s family against him. Will Thor earn Pia’s forgiveness and find their runaway children in time for Christmas?

After a night of cards and drinking, Thor’s splitting headache is the least of his worries. When a messenger arrives with a contract for him to sign, his wife Pia discovers he’s agreed to betroth their son to the Earl of Devon’s daughter. Pia’s beyond furious and demands he fix it—or else. After overhearing the argument between their parents, the twins Liam and Lily, decide to runaway in protest of the contract. Thor and Pia set out to find their rebellious children before something dreadful happens to them. Will Thor convince Pia to forgive him and find the twins before Christmas or will their family fall apart forever?

He wondered how far he could push her. The decision to give into her and take her on his ship had already been made. Lilliana just didn’t know he already decided to let her come back to America with him, but only because it worked in his own plans.

“What do I get for my trouble?” he asked. “I’d be risking quite a lot to assist you with your scheme.”

“What do you want? Money? I certainly can afford to pay for my passage.”

Rand’s lips rose into a cocky smile. He desired a lot from her, but at this point only one thing would do as payment. Would the lovely lady be willing to give it to him? He had nothing to lose and only one way to find out.

Lilliana looked stunned as she stared unblinkingly at him; and then just as suddenly she stopped dancing right in the middle of the dance floor. Her face flushed a pretty shade of pink as she began to move to the music again with him in the lead.

“How forward of you. I’m not sure I like your idea of compensation.”

“It’s a small thing, one little kiss. To be given to me at a time of my choosing.” He leaned in close to her and whispered in her ear. “Are you afraid?”

Lilliana’s breath sucked deep into her chest, and he could feel her slowly exhale it in little pants. Her pulse raced on her wrist beneath the palm of his hand and thrummed a small beat as he held it firmly in his grasp. A blush formed on her cheeks turning them a nice shade of pink and her lips parted in anticipation. Her body’s reactions suggested she had an interest in kissing him also.  Would she take the bait and give him what he desired? He needed her to accept the proposal. Once she did he’d have her sailing with him in a few short days.

BUY ‘A CRYSTAL ANGEL’ from AMAZON and BREATHLESS PRESS!

Growing up she was the only girl out of six children. She is a single mother of two teenage boys; there is never a dull moment in her life. Reading books is her favorite hobby. There is nothing like a nice glass of wine and a good book to relax with at the end of the day.

There are always stories inside her head; she just never thought she could make them come to life. That creativity has finally found an outlet. If you want to contact Dawn you can visit her webpage at www.authordawnbrower.com, her facebook page at www.facebook.com/DawnMarieBrower, on her blog http://dawnbrower.wordpress.com or her twitter page at www.twitter.com/dawnab33.