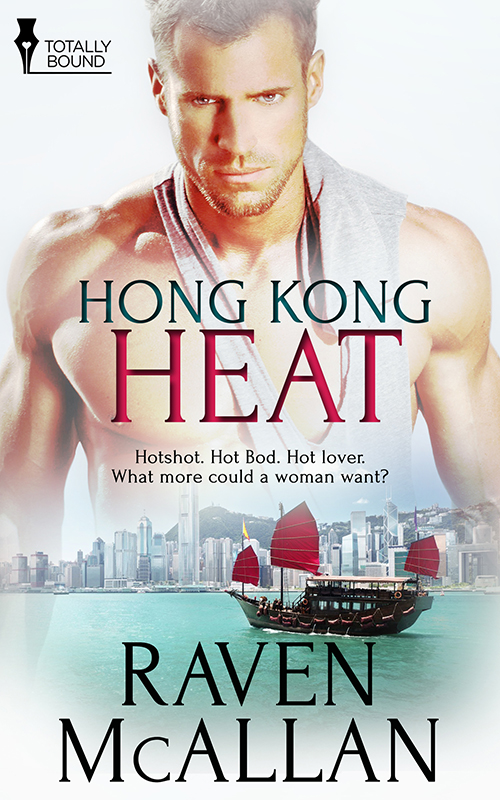 [Ember’s Note: Raven McAllen is here to take over my blog and share some exciting tidbits about her newest releases…warning: extreme sizzle ahead, proceed with caution!]

So this month I have two books out from Totally Bound Publishing and boy, am I excited!

As I like to set my stories in places I know, I based the castle on a ruin not far from where I live, and well Hong Kong heat is set in one of my favorite cites in the world.

The only things the two books have in common, is I write them, and they’re set in the present day.

Other than that? Well I’m lucky that Totally Bound let me bring the changes a bit.

As the series blurb says… What happens at Diomhair stays there.

Here’s the blurb for Shane and Ross’ story…

At some time in their life, everyone has choices to make.

For Shane it could be a chance to rediscover her love of kink.

For Ross it’s the chance to tempt her to be his kitten.

But Shane has to settle some demons before she can move forward.

Until then, well a little playing wouldn’t matter—would it?

However, play can become serious, and decisions have to be made that could change both their lives for ever.

This is their chance, to be together as Dom and sub or wave goodbye. But at Diomhair, nothing is as straightforward as you hoped, and Ross and Shane have a lot to do, before they can say yes…or no.

And a wee TEASER:

“Do you realize how stupid you are coming inside when you don’t know me from Adam? I could be an axe murderer.”

“Are you?” she said and grinned. “I’ve got a black belt in judo and know how to disarm an axe wielding madman at five paces.”

Somehow he doubted it, but he admired her grit.

She waved one hand in the air. “My brothers taught me, they said it works every time.” The cheeky expression on her face made him jump. Who was it she reminded him of?

She giggled. “Whip up my top, wave my boobs and when they’re gobsmacked, kick them in the goolies and run like hell.”

Ross looked down to where her heavy jacket covered her breasts. “I guess that might work.”

She nodded. “According to Troy and Jase it will. I trust them.”

Ross narrowed his eyes. The names coupled together like that were as familiar as his own. Rather than ask her to clarify her statement, he chose to prod a little more. It was the most fun he’d had for ages. If she was related to the Donoghue brothers, she knew more about his lifestyle than she let on. He wished he could recall her name. Something not usual he thought, a boy’s name maybe? She’d be around ten or twelve years younger than him, and someone he remembered as a leggy, flat chested school girl. No wonder he couldn’t place her. This woman might still be leggy, but she certainly wasn’t flat chested. Now she was a beautiful and voluptuous woman who piqued his interest.

He’d heard about her accidental voyeur sessions all those years ago. Or was it accidental? He hadn’t caught up with Troy and Jase for years. Maybe once she owned up to who she was he could ask her how they were. For now though…

“I think, girl you need to explain further. What’s your name?” He barked out the question in a short staccato burst of words and she jumped. However it seemed she wasn’t intimidated easily.

She returned his stare with one of her own.

Ross blinked and the pulse in his wrist jumped. One thing he wasn’t used to was backchat from sassy subs. He was more used to instant obedience and awkwardly, sometimes blind adoration. Oh he liked a bit of spunk, not lap dog placidness, but he never received, or welcomed such blatant confrontations. They caused more trouble than the excitement the results gave him.

She bit her lip. Not in a worried way, he decided, but more in a considering one. Even though his temper was provoked, Ross had to stop himself laughing. She was so unafraid, and really she should be quaking in her sheepskin boots. There she was, with a strange guy, with no one else around and she was challenging him.

Okay, sunshine, you want it, then by god you’ll get it.

Her eyes widened at the sobriquet, and he would have sworn she twitched and began to dip her head before she straightened. “Yeah, true enough. I’m trading words with an asshole. I’ll go and wait in the car.”

I hope that intrigues you. So how about this?

Debra Scotburn never thought of herself as a cougar, until she fell in lust at first sight with a much younger man.

Braam Van Meister, a hotshot—and hot-bod—trouble- doesn’t do commitment, until the older, curvy, vivacious brunette robs him off his ability to control a certain body part.

Unable to keep their hands off each other, they embark on a passion-filled holiday fling.

Surely that is all it can ever be? Braam’s work takes him all around the world at a moment’s notice, and Debra is on the last leg of her middle-aged-crisis induced gap year.

When misunderstandings tear them apart, can they both admit their love and find the trust needed to make this more than just a fling?

She found an area of grass in the sunshine and settled down on it to read about her latest sex on legs hero and how he managed to convince his lady that he wanted her. Within minutes, Debra was engrossed. As a child she’d often been chastised for being oblivious to everything other than her book when she was reading.

Today was no exception. It wasn’t until when the sun moved behind the trees and she was sitting in the shade that Debra realised how much time had passed.

The occupants of the park had changed. To one side, a tai chi lesson was in process and the jogging track was much busier. Debra checked her watch and groaned. She’d been oblivious for well over an hour and undoubtedly ought to move and think about getting ready for dinner.

Getting up wasn’t as easy as she’d hoped. Sitting in one position for so long had given her pins and needles and she winced at the pain.

I don’t mind nice stings and tingles, well I didn’t, but hey, it’s been so long, who knows? But this is bloody agony. She rubbed her legs and wriggled her toes to get the circulation back to normal.

Debra collected her belongings and made her way across the grass towards the entrance to the park. To get there she had to cross the jogging track and dodge the joggers. Their numbers had increased considerably now and Debra waited to let a steady stream of people of all shapes and sizes go by. One guy, tall, fit and blond hair, caught her eye and her heart did a weird double pitter pat.

It was the guy from the hotel. No snazzy suit, but black running shorts and a black sleeveless vest that shouted serious runner to her. As he approached along the track, she couldn’t help but admire—and drool at—the way he moved. His short hair had curled in the heat and the sheen of sweat over his body highlighted the muscles in his arms and the strength of his legs. She’d bet he had a washboard stomach and a cute ass.

Dammit, cease and desist drooling, woman, you’ll embarrass yourself. Nevertheless, she took a step back to wait for him to pass.

There was a grunt of pain from behind her. Deb turned to see an elderly lady, with perfectly coiffed white hair and wearing an elegant linen suit, rub her ankle.

“Oh, heavens, I’m so sorry, I wasn’t watching what I was doing. Have I hurt you badly?” Debra was appalled at her clumsiness. First day there and injuring the natives wasn’t a good start.

The lady laughed. “Don’t worry, no lasting damage and I wasn’t paying attention either. I was waiting for Gorgeous George to go by.” She inclined her head towards the guy who was a few yards away.

The lady rolled her eyes. “No idea if that’s his name, but he sure is gorgeous. Sexy Steve, Hot Bod Harry, take your pick. I see him most evenings and it makes my day.” She waved at the man who grinned and waved back, before he slowed to almost a halt.

“Hi, gorgeous, you ready to run away with me yet?”

The lady cackled. “I’m too much of a woman for you, honey.”

“Too true, my loss.” He looked straight at Debra and winked. “How about it?”

Deb bit back a snigger. “Depends what ‘it’ you mean.” She blushed. Was she actually bandying innuendo with a stranger? A much younger than her stranger. Her kids would be horrified. Tough, it’s only a ships that pass in the night thing.

He jogged in a circle. “Up to you, honey.” He waved, increased his speed and moved away.

The older lady sighed. “See what I mean? Fit as hell. I think Gorgeous George has the hots for you. The Jie Jies will be disappointed.”

“The what?” Debra hadn’t heard that expression before.

“Jie Jies, sisters, people who look after the family. Like Ayis, or Amahs. It’s a very Hong Kong expression. My Jie Jie was a darling. Ah well, back to my Angus and a cuddle. He might not be as slim as Georgie boy, but he won’t wear me out. Mind you our Mr Mysterious does make me quiver and even wonder if I could take up jogging at my advanced age.”

Debra knew just what she meant. Trust her to fancy a fitness freak. Debra was the first to admit that her idea of fitness was to abstain from eating three extra chocolate biscuits and run up the stairs rather than walk.

She sighed. Ah well, she knew what the lady meant about having her day made. There was no two ways about it, the guy was sex on legs and the sort of man to make you roll over and shout ‘play your cards right and you can have me’.