Taking a Look at “Dominated By The Earl” by Raven McAllen 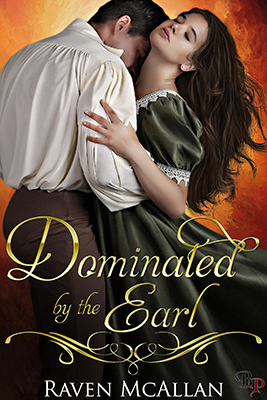 Today I am honored to host Raven McAllen. Not only is she a fellow Breathless Press author, she’s one of the most prolific writers I’ve met in my career. She’s on my blog today to talk about her new release, “Dominated By The Earl”!

Thank you so much for hosting me!

I’m all over excited about Dominated by the Earl.

It was originally published as A Matter of Faith, after the name of the little girl who pops up in the story, but people didn’t like it. So voila, new name and new cover…

When I got the cover for this story I was in awe. It’s so swashbuckling, Regency perfection. Now I have to hope the story does it justice.

(Ember Leigh: Oh don’t worry, I think it will!)

She hadn’t expected it to be so long or so fraught.

When Justin joined his regiment, and was sent to the continent, Leonora promised to wait for him to return.

She didn’t think it would take so long, or she’d have so many difficulties to face. Her life changes as she struggles to cope without Justin and keep his estate running.

With someone out to destroy all she holds dear, Leonora has to fight for her beliefs and her family, and hope they get the happy ever after they deserve.

“I need to be in charge. I need to know how far I can push you, and then go a little further. I will be your man in every way, Nora, but you must be my lady. And in my world that is obeying me, talking to me, and being open and honest. At this moment, I can think of nothing more pleasurable than putting you over my knee and tanning your delectable arse until it is the color of both sets of your lips.”

With his crude words, a wave of heat rushed through her and the said sets of lips—both of them—tingled. Once more she wondered how she could be excited by something so barbaric? Because it intrigues me.

“How can a spanking be pleasurable?” she asked with interest. “Pain is pain, and a punishment.”

“Ah, Nora, I will show you different. Let your hair down.” He waited as she unpinned the tresses and let them tumble over her shoulders. “Your hair should always be like that when we’re together. Promise me thus.”

She nodded. “It will be my pleasure.”

“Good. Now, lift your skirts above your waist, kneel on the bed, and rest your head on the coverlet.” Justin crossed his arms over his chest and the action corded his muscles. “Now.” His tone brooked no refusal.

With a last dubious glance at his impassive features, Nora gathered her skirts in her hands and clambered onto the high canopied bed. The soft feather mattress sank under her body and she swayed as she tried to do as he asked. She looked over her shoulder as she settled her head on the soft cover. Her hair fell forward like a silken blindfold.

“What should I do with my hands?” He chuckled. She rolled her eyes. “Be serious.” “Oh, I am love. Rest your head on them for now. Later I’m looking forward to feeling them on me. First though, I’m going to play.”

She wasn’t sure what he meant. Her quim stung with pin-pricks of desire that danced all over her and her skin seemed too tight for her body. Nora decided she could only hope it meant he was going to deliver something to alleviate the condition. She wriggled to get into the position he demanded, conscious of her skirts tangled around her middle. Her arse and legs were bare, apart from her stockings and garters, and her upper body was still covered in flower-patterned lawn. It seemed decadent and exciting. Her face heated as she realized the signs of her arousal would be visible for him to see and touch. What would happen next? Somehow she didn’t think it would shock him. And I will not let him see if it shocks me.

Nora shivered and her pulse jumped as he stroked her ankle. The silk of her stockings moved over her feet in a soft caress. She sighed in pleasure at the tingle the friction created.

“Nora, if anything I do is unbearable, you must say so. If you say cease, I will stop. However, remember this is for us. It is our completion.” His voice was stern. Rather than frightening her, the severe tone only served to heighten her awareness and increase her arousal.

Nevertheless, his words puzzled her. I assume we are about to hump therefore why would I want him to stop? “I don’t understand. If you are about to bed me, and that act has continued the human race throughout time, why would it be unbearable?”

Justin brushed the back of his hand over the swell of her arse before he answered. Nora froze as his finger dipped between her legs and—sweet heaven—stroked the soft flesh that sheltered her channel.

“W…what are you doing?” she asked. Her words came out in a breathy whisper. “Justin, that is…” Her voice trailed off. It was delicious! Her body sparked and zinged as pleasure darts hit her everywhere.

“Simple procreation is one thing. To make your head spin with desire, your body sing with sensation, and your wits desert you, until all you do is feel and not think? Well, my dear, that is another. I could put you on your back and fill your cunt with my cock and fuck you like that. In all conscience I would make it good for you, but good is lukewarm. We both deserve more than that. Memories to take out and savor, to use for pleasure whilst we’re apart. And later we will have more. I wish to see you inked and thus share my mark. To my mind, that must follow for us to be complete.”

Inked? As in a permanent mark on my skin? The idea intrigued her. “You have such a mark?”

“I do, and later I will show you. I’m going to go slowly at first and let you adjust to each and every stage of our fucking. Make no mistake Nora, I will push you. We have but this one night.”

“What?” She sat up, turned, and looked at him, all demands forgotten. There was a lump of something heavy and unpalatable lodged in her throat. His expression was unfathomable, and she could see a shadow across his eyes. “Why?”

“I heard just before we met. I was on my way to tell Arthur. I report to the regiment tomorrow.”

‘Dominated by the Earl’ Buy Links:

You can find all about me on www.ravenmcallan.com