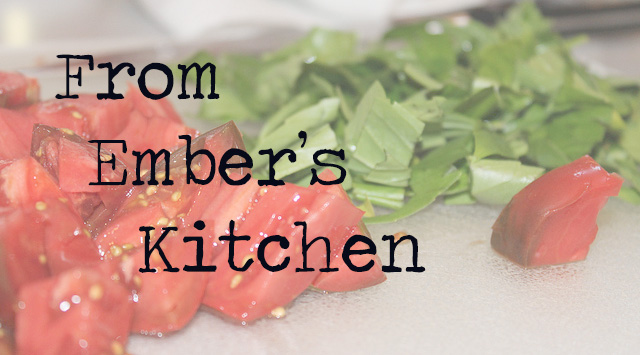 This is the first installment of a series called “From Ember’s Kitchen” where I’ll share my favorite recipes for dinner, snacks, smoothies and more. Here’s my story:

It’s no secret here, I love to cook. But it wasn’t always this way.

In fact, I was raised exclusively on Hamburger Helper and microwave meals.

I used to be overweight and extremely unhealthy. Shoving lots of pizzas, mac & cheese, and Wendy’s chicken nuggets down my gullet as much as I could. I reached a particularly overweight period in college and felt pretty awful, pretty much all of the time. I never exercised – well, I went once a month and hoped the 40 minutes on the elliptical would last for the next few weeks (but it never did!).

Once I was diagnosed with a life-changing medical condition (a spinal cord tumor) in 2007, the only choice was surgery to remove it. The resulting operation was a SUCCESS – tumor was completely removed – but at a cost: it left me paralyzed. For several months I was relegated to walkers, hospital beds, and intense physical rehabilitation.

My doctors told me to expect a life in a wheel chair.

I wasn’t quite down with this idea – I was about to start my senior year in college, after all, and I was determined to be normal. Despite the fierce willpower and the baby steps (literally!) toward regaining physical capability, my weight crept even higher. And without the capability to even care for myself, I began to feel all sorts of despair.

I’m on the left feigning escape from the rehab hospital. Don’t worry — I didn’t get far. My legs gave out on the staircase!

But I had one tool at my disposal, despite the limited mobility and the languorous physical rehabilitation – and that tool was what I put in my mouth.

In the summer of 2007, I changed my eating lifestyle.

I began to watch, with curiosity and care, what I was putting into my mouth and why. I counted calories for a time, as I got a hold on my eating situation. (I found out I was eating almost twice the necessary amount of food a person of my height and weight needed at that time. Oops!)

I experimented with stir-fry’s first. Mostly frozen vegetables, to be honest, but it was better than the boxed mac & cheese, at least!

I limited my intake according to the caloric count suggested for a person of my stature.

And miraculously, unbelievably, I began to lose weight. Even without having full use of my legs or being even half as active as I had been prior to my surgery.

Throughout the next few years, I slowly, painstakingly regained function of my formerly-paralyzed legs. I picked up yoga, I started traveling the world again, I did everything I could to challenge and otherwise coax myself into a better state of physicality.

Having my mobility stripped from me propelled me to never, ever, EVER take for granted the gift of my two legs. And I consider my body a gift — so I want to care for it more than ever now. I’m not sure I would have felt this way if the surgery hadn’t put things into perspective.

My surgery was in 2007, and in 2015 I consider myself ‘good’; but I still have bad days, where my nerve damage works against me, where my strength fails me, where I just can’t get my body to operate how I know it SHOULD.

But oh well. I can walk! That’s the most important thing to me since May 29th, 2007. That, and the fact that I feel EXCELLENT.

And now, over 7 years later, I climbed Machu Picchu for Christmas — a previously unimaginable feat!

In terms of my health prior to my surgery, my case was one of simple overeating. A lack of healthy foundation plus a real love for everything processed, salty, and greasy led to my weight situation. And I was able to turn it around.

This is not the case for everyone. Some people have hormonal situations, or inactive thyroids, or medication conflicts, or any other number of frustrating conditions that work against them in their attempt to look or feel the way they want.

But eating well and eating right is something we should all do, no matter how we look or where we’re at in our journey toward wellness.

I’ll be posting frequent recipes – mostly just my favorites – from here on out, and I’d LOVE for suggestions, ideas, and feedback about your own personal kitchen favorites!

Eating well is not only delicious but fun. However, moderation has, and always will be, key for me. This means that I indulge, I eat poorly sometimes, I’ll make French fries at home and splurge with a bar of chocolate. I don’t live in extremes, but rather, in the ebb and flow of balance. I like to have my cake and eat it too – but then I’ll eat strictly vegan for the next few days! It’s a give and take, and I hope that my readers will understand this.

So don’t fret if you see a significantly unhealthy recipe pop up here and there, because that most certainly forms part of my overall eating lifestyle. It’s a winding path comprised mostly of healthy vegetarian fare with the occasional side-trip through the lands of the No-No’s.

I love to share the different approaches to nutrition that I’ve found throughout my long and sometimes complicated journey. I hope you’ll join me!